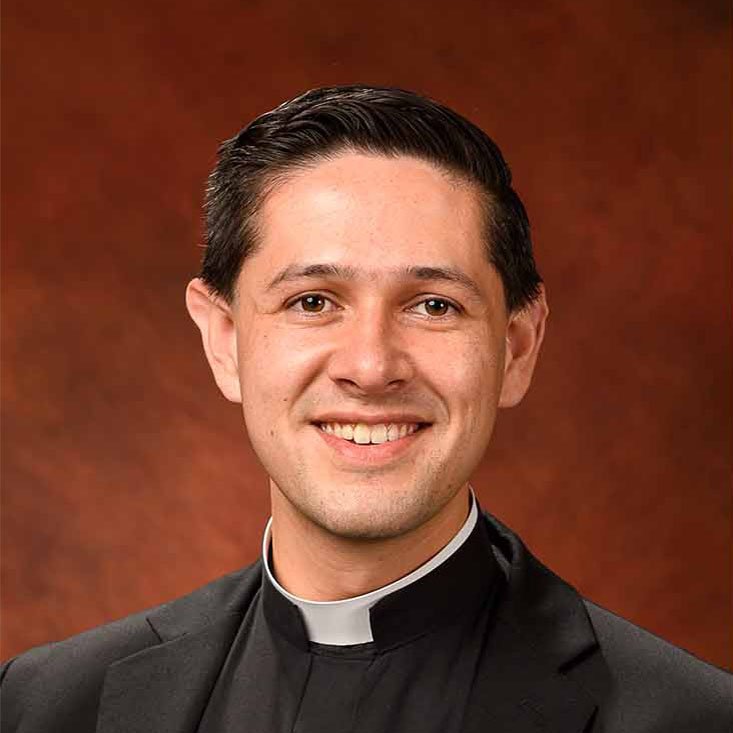 “Lord,” I prayed, “I don’t know what you have in store for me, but my life is yours. You can have it all. My plans are nothing compared to the plans you clearly have for me. These past years are proof enough of that. So I surrender it all to you, Lord. Just show me what you want me to do.”
Back to Seminarians

The story of my vocation begins with my conversion to the Catholic faith. I grew up as a Methodist kid in a small town in southern Oregon. Although my family went to church each Sunday, and my parents even taught Sunday school, we went through something of a crisis of faith when my mom started having seizures. It became hard for us to do many things as a family, and church was one of the first to go. I was in middle school at the time. Mostly I remember being happy that we did not have to get up early anymore on the weekends!

Still, how true is the saying that “the Cross is our ladder to heaven” (St. John Vianney). Always a curious kid, I found myself beginning to ask big questions about the meaning of life and, especially, the meaning and purpose of suffering. Being shy, though, I was not asking anyone—certainly not the pastor of our former Methodist church. Rather, I was seeking the truth in the many New Age, self-help and Eastern spirituality books of my dad’s (eclectic) library.

This was my spiritual formation as I grew up and entered high school. I became involved in New Age communities online, and called myself a Buddhist for a while, then a Taoist, as I continued reading everything I could get my hands on. Thanks be to God, reading widely and indiscriminately allowed me one day to stumble upon Catholic Answers. For a while, I had found myself becoming aware of a kind of cognitive dissonance: an awareness that “it would be nice if all this were true,” willing myself to believe what nevertheless didn’t quite seem to adequately explain reality. In that article about original sin, I encountered, for the first time, Truth which penetrated my heart and seemed to explain reality deeply, down to the bones of things! In contrast to all the New Age spirituality I had learned so far, I thought, “I would never wish for this to be true. But it makes so much sense.”

The more I read, the more I became conscious of a little tug on my heart, gentle, yet strangely persistent: “Go to Mass.” I put it off for weeks, afraid of what my parents might think, before finally (without telling them where I was going!) I left home one Sunday morning in February 2011 for the Catholic Church. Sometimes I say that God called me there, and I’ve never left.

At that Mass, I remember being awed by the ritual and the prayers, but most of all, I remember the profound consolation of the Holy Spirit which I felt when the priest elevated the Host. It was such a feeling of deep, inner peace, of “joy surpassing understanding,” as I had never felt before! At that moment, the intellectual conversion through which God had slowly been leading me reached my heart.

I continued going to Sunday Mass (thereafter with my parents’ knowledge—and slightly nervous approval), and then to daily Mass. At one weekday Mass that summer, the first time I had been to this particular parish, a Dominican priest stopped me outside the church and asked me point-blank: “Have you ever considered if you might have a vocation to the priesthood?” I was stunned speechless … because I had been feeling the gentlest nudge, the faintest attraction to the priesthood, almost since I first started coming to Mass, but had not taken it seriously. I was not even Catholic yet! I “knew” I was going to be a graphic designer. How could God be calling me?

Nonetheless, that priest planted a seed which continued to take root in me throughout my last two years of high school, as I received the sacraments and entered into full communion with the Church. By my senior year, the idea of priesthood loomed so large in my heart that I just could not ignore it. I did not apply to any of the colleges I had been planning to attend. Instead, I worked for a year in a call center taking Spanish insurance claims and going to daily Mass, praying for the grace to know God’s will.

Finally, one day I was sitting in my parish church after Mass, and I was struck with this awareness of all that God had done in my life up to that moment. It was as if I could see all my own plans for my life, all neatly laid out, but the foundation they were built on was crumbling into dust. Instead, here I was, sitting in a Catholic church, not only confirmed and received into communion, but discerning a vocation to the priesthood!

“Lord,” I prayed, “I don’t know what you have in store for me, but my life is yours. You can have it all. My plans are nothing compared to the plans you clearly have for me. These past years are proof enough of that. So I surrender it all to you, Lord. Just show me what you want me to do.”

People began asking me almost every day from that point on whether I had thought about priesthood. I went on a discernment retreat that January, right after Archbishop Sample had been appointed to the see of Portland, and after hearing his vocation story and reflections on priestly life and ministry, I thought: “I’m ready. I want to be on his team.”

In 2014, I was accepted as a seminarian for the Archdiocese of Portland. God has continued leading me by strange and unexpected ways ever since, but always building up my faith, hope, and love for Him in His holy Church. I pray with the Prophet Elijah: “Zelo zelatus sum pro Domino Deo exercituum!” “With zeal have I been zealous for the Lord, God of hosts!” Please pray for me.